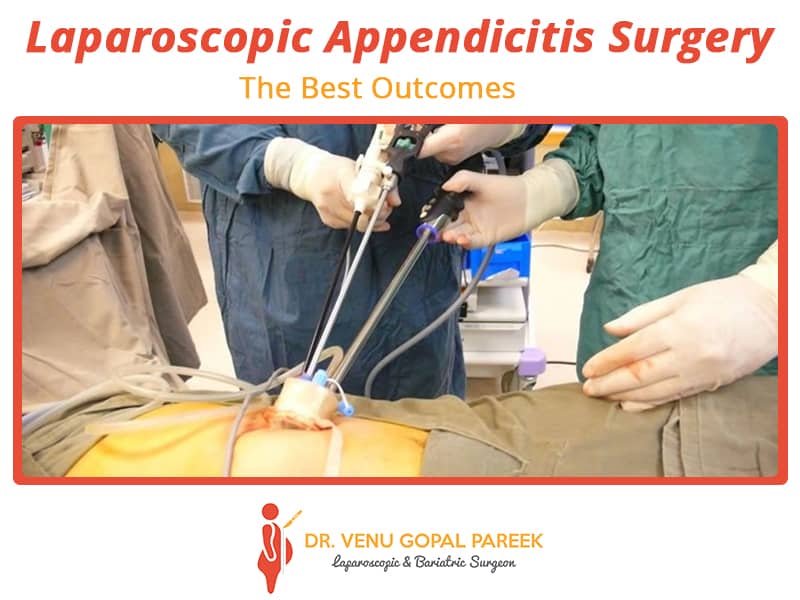 Appendectomy is the surgical removal of appendix to treat appendicitis. Appendectomy is one of the most common surgeries. One in every two thousand people has appendicitis somewhere in their life. Treatment requires surgery to remove the infected attachment. Traditionally, the appendix is removed by an incision near the lower right abdominal wall. Appendectomy is a conventional emergency surgery.

Like other organs in the body, the appendix can become infected and cause a condition known as appendicitis or appendix inflammation. This condition can be treated with antibiotics. But in most cases, minimally invasive laparoscopic surgery is the only solution. People who have undergone this procedure can quickly recover and lead a normal, healthy life.

Dr Venu Gopal Pareek provides this blog which gives information about the laparoscopic appendicitis surgery and the outcomes of the operation.

What is an Appendix?

The appendix is ​​a small thin pouch that attaches to the large intestine. It sits on the lower right side of the abdomen. If you suffer from appendicitis, then it should be removed immediately. If left untreated, your appendix may burst. It is a surgical emergency. Health experts tend to disagree with the goals of the organs. Some say it helps with immunity, while others believe it is useless evidence of human evolution.

There are two types of operations to remove the appendix. The standard method is open appendectomy. A newer and less invasive approach is laparoscopic appendectomy. Let’s go into details.

A large cut that is about 2 to 4 inches long is made on the lower right side of the abdomen. The appendix is then ​​removed through an incision.

For more than a century, removal of the appendix by open surgery is ​​the only standard treatment for appendicitis.

This method is less invasive, and this means it requires small incisions. 1 to 3 small incisions are made. In one incision, a long, thin tube called a laparoscope is inserted. It has a small video camera and surgical instruments. The surgeon looks at the TV screen to look inside the abdomen and directs the device. The appendix is ​​removed by one of the incisions.

During the laparoscopic surgery, a doctor may decide if an open appendectomy is needed or not. If your appendix has burst and the infection has spread, you may need an open appendicectomy.

Laparoscopic appendectomy can cause less pain and scarring than an open appendectomy. In both surgeries, scars are often difficult to notice after healing. Both types of surgery have a low risk of complications.

Who is a Candidate For Laparoscopic Appendectomy?

The words laparoscopy appendectomy describe the techniques used by surgeons to gain access to internal surgical sites. Most laparoscopic appendectomy starts in the same way. With the help of the cannula (a narrow tube-like instrument), the surgeon reaches the abdomen. Laparoscopes (small telescopes mounted on the camcorder) is inserted through the cannula so that the surgeon receives an enlarged view of the patient’s internal organs on the television screen.

Several other cannulas were inserted so that the surgeon could work inside and remove the organ (appendix). The entire procedure can be completed with a cannula or by extending one small incision from the cannula. During the procedure, a drain is placed. It will be removed later by a surgeon.

Results can vary depending on the type of procedure and the patient’s general condition. General benefits are:

Expected Outcomes After the Surgery

Most patients feel better soon after appendectomy. Many patients get discharged from the hospital within 24 hours after the removal of the appendix with the laparoscopic method. Others may require staying longer than three to five days. Nearly all patients return to normal activities within three weeks.

The rapid detection and diagnosis of appendicitis are crucial for a person’s ability to heal before the appendix ruptures. Many people can go home within two days after the procedure. After removing an appendix, lifestyle changes are not required. Since the appendix does not fulfil vital functions in the body, a person can live without it.

After reading the above benefits one may conclude that having laparoscopic surgery is better than an open appendectomy. If you require more information about the laparoscopic appendectomy contact Dr Venu Gopal Pareek and book your appointment today!