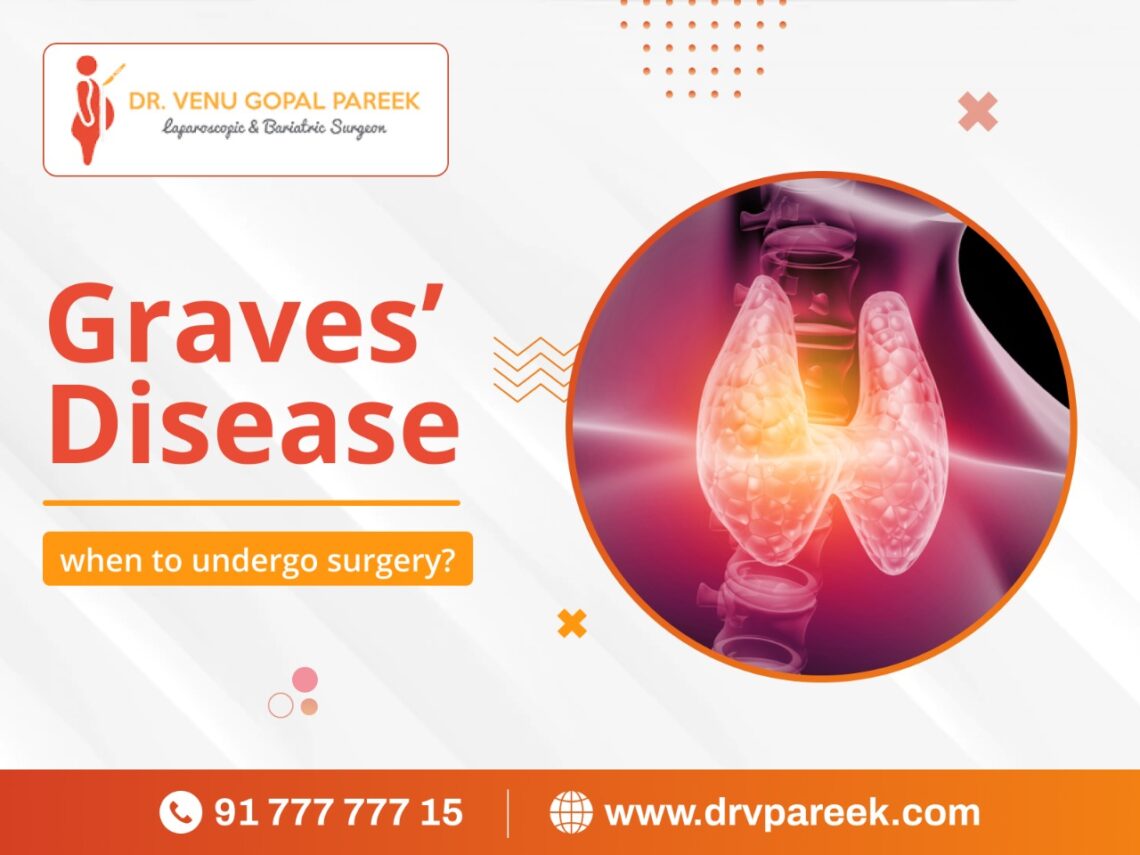 Graves’ disease — an autoimmune disorder which affects the thyroid gland.  Sir Robert Graves was the first person to describe it in the early 19th century, so it was named after him. The thyroid gland is a small-sized butterfly-shaped gland which is located in the neck. It produces hormones that regulate many bodily functions like temperature, heart rate and metabolism. In Graves’ disease, the body’s immune system attacks the thyroid gland, resulting in the overproduction of thyroid hormones (hyperthyroidism).

Excess production of thyroid hormones affects many systems in your body, so symptoms of this condition can be wide-ranging. Graves’ disease might affect people of any age but it’s more commonly seen in women and younger people of age around 40 years.

Experts are researching to find the exact cause of Graves’ disease, while some people thought it is caused by a combination of genetic and environmental factors. Curing Graves’ disease is the hardest part, but it can be effectively managed with medication lifestyle changes and surgery in severe cases.

Symptoms of Graves’ disease include

Common signs and symptoms observed in people with Graves’ disease are:

There is no one definitive answer to this question as the exact cause of Graves’ disease is not fully understood. However, there are several theories as to what may contribute to the development of this condition, including genetic factors, immune system abnormalities, and hormonal imbalances.

Overprodution of an antibody called thyroid-stimulating immunoglobulin (TSI) might trigger the production of thyroid hormones in excess and other environmental factors like stress, virus/infection, and pregnancy can result in this condition.

How common is Graves’ disease?

Despite the fact that 60% to 80% of instances of hyperthyroidism are caused by Graves’ disease, the disorder is still quite uncommon.

In India, around 42 million people are living with thyroid disorders and hypothyroidism is among the most common forms of thyroid problems, affecting 1 in 10 adults.

Who is at risk of Graves’ disease?

Women are more likely to suffer from Graves’ disease than men. Most people who suffer from this condition are between 30 and 50 years, but older people and children can also be affected.

Having a family history of thyroid disease and smoking cigarettes increases your risk of developing Graves’ disease.

It’s also more likely that you’ll develop Graves’ disease if you suffer from other autoimmune disorders, such as arthritis, lupus, diabetes, celiac disease and vitiligo.

Graves’ disease is a chronic disease. However, it is possible to maintain a healthy thyroid hormone level, with treatments. The condition might even temporarily disappear with medical treatment (remission). Here are some of the potential treatment options for graves disease.

Radioactive iodine therapy (RAI) is a form of treatment for Graves’ disease. RAI involves taking a pill or liquid form of radioactive iodine, which is absorbed by the thyroid cells which then destroys some of the overactive glands. This reduces thyroid hormone production and can help to normalize hormone levels in the body.

RAI is considered an effective treatment, but it can cause some side effects, such as temporary hypothyroidism (low thyroid hormone levels), and nausea and may worsen graves’ ophthalmopathy. RAI is not typically recommended for people with eye problems and pregnant or breastfeeding women, as the radiation can be passed to the developing fetus or infant.

If you are considering RAI for the treatment of Graves’ disease, be sure to discuss the risks and benefits with your doctor to ensure that it is the best treatment option for you.

The main types of medication used to treat this condition are as follows:

Anti-thyroid medications: These drugs help to control the overactive thyroid by reducing the amount of thyroid hormone produced. They are commonly suggested to pregnant and breastfeeding women. The most common anti-thyroid medications are propylthiouracil (PTU) and methimazole (Tapazole).

Beta-blockers: These drugs are used to control some of the symptoms of Graves’ disease, such as anxiety, rapid heartbeat, and sweating. The most common beta-blocker is propranolol (Inderal).

When Surgery for graves disease is recommended?

Surgery for Graves’ disease is typically recommended when the disease is severe and does not respond to other forms of treatment. When the patient is suffering from goitre (increasing thyroid gland).

The standard surgical procedure for Graves’ disease is a total thyroidectomy, which involves the removal of the entire thyroid gland. This is usually done as an inpatient procedure, which means that the patient will need to stay in the hospital for a few days after the surgery. In some cases, a partial thyroidectomy may be performed, which involves the removal of only a portion of the gland. After surgery, the patient needs to consume thyroid medication regularly as advised by the doctor for the rest of their life.

Surgery is the best way to remit Graves’ disease, and it is usually recommended for people who have severe symptoms or who want a quick solution for this disease.

If you are having any thyroid problems and looking for the best solution, consult Dr. Venugopal Pareek one of the best doctors for thyroid surgery in Hyderabad. He has more than fifteen years of experience in treating various thyroid disorders including graves disease. To book an appointment with the doctor call +91 91-777-77715.