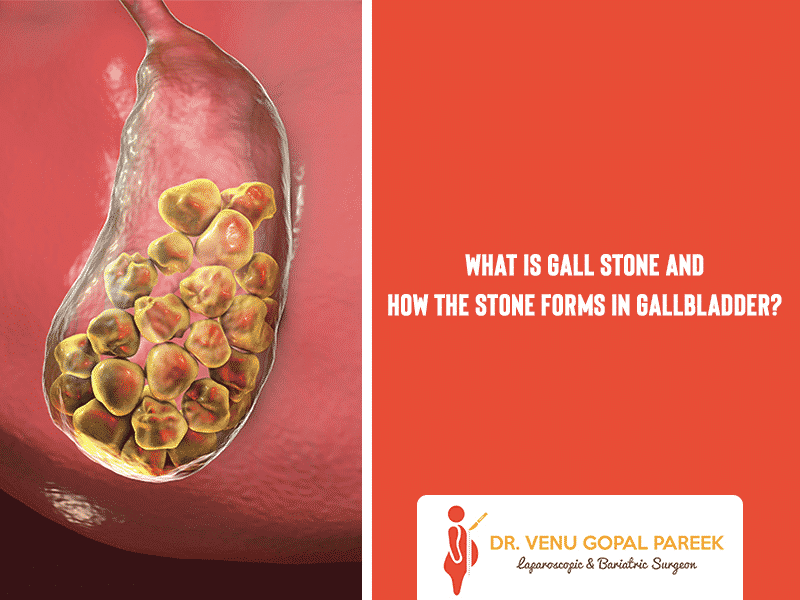 Gallstones usually consist of cholesterol or bile salts, a common component of bile that has hardened into stones. These stones can cause sudden pain if the cystic ducts in the gallbladder or the bile duct leading to the liver become blocked.

Gastrosurgeon Dr Venu Gopal Pareek treats this common problem in adults and children with minimally invasive laproscopic technology. For more information about gallbladder, causes, symptoms, diagnosis, and treatment, go through this article provided by Dr Venugopal Pareek. Before knowing about gallstones, let us know about the gallbladder.

What is the gallbladder? 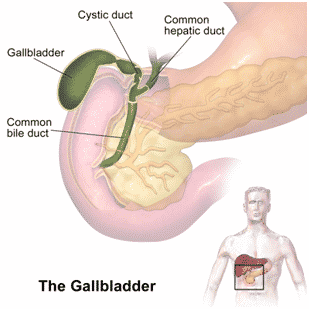 The gallbladder has connections to other parts of the digestive system through a series of ducts. This channel helps transport bile and supports the entire digestive process of food. Finally, the bile finds its way to the common bile duct, where it enters the small intestine through a particular sphincter. There, bile can mix directly with food that is waiting to get digested. The common bile duct then empties the bile into the duodenum, the first part of a very long small intestine.

Not every bile migrates directly from the liver to the duodenum. The other part of the bile moves from the liver to the gallbladder through special channels called cystic ducts. This gallbladder stores bile to help digest food in a short time. When eating fatty foods, the gallbladder receives a signal to contract and squeeze some of the bile that is in the common bile duct, where it is transferred to the small intestine to mix with food. All bile enters the small intestine, where it supports the digestion of food. Then! 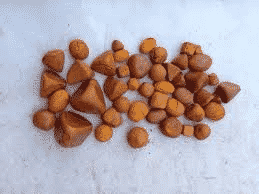 Gallstones are stone objects that develop in the gallbladder or bile duct. Gallstones can vary dramatically in size from small sand to objects the size of golf balls. Interestingly, small stones can often cause the most problems as It is a stone that can leave the gallbladder and gets stuck. Larger stones tend to stay calm in the gallbladder. It is essential to know that many people who have gallstones never bother them and may not know that they are there. No treatment is needed in this case. 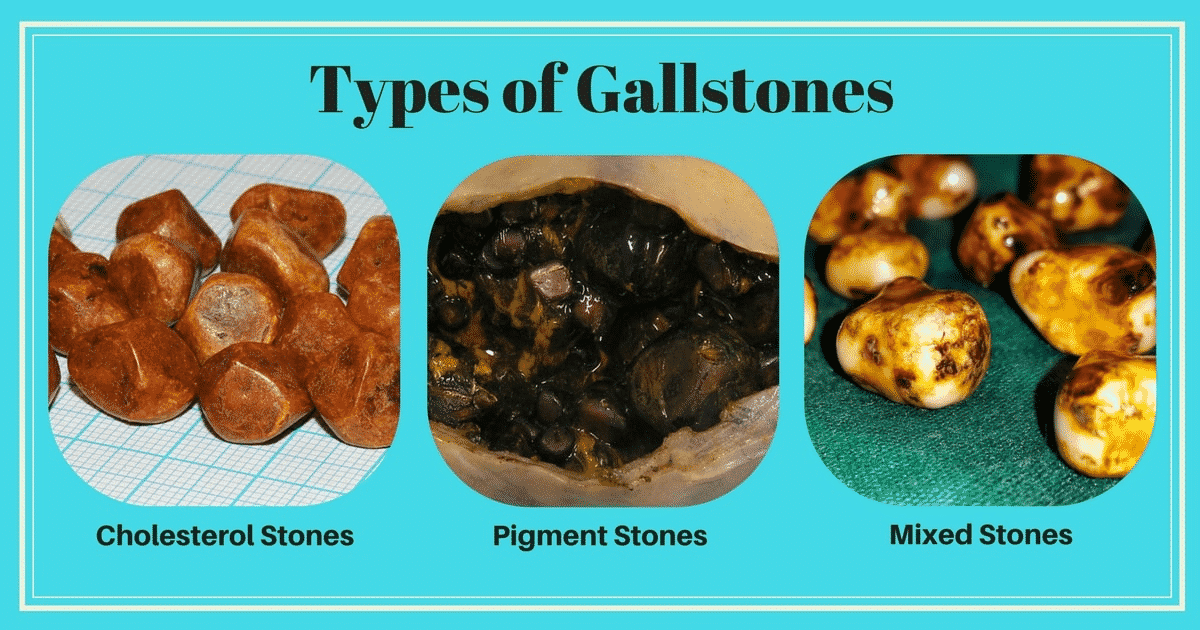 Bile has several components, including cholesterol, bile salts, and bile pigments (e.g., bilirubin). It is believed that gallstones develop because of an imbalance in the chemical composition of bile in the gallbladder, for example, when cholesterol or bile bilirubin levels become too high. Excessive cholesterol or bile forms crystals that eventually form stones.

The two main types of gallstones are: 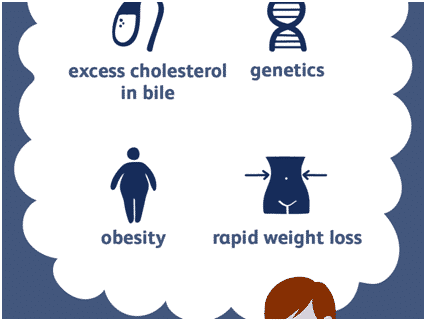 The precise cause for gallstone formation is not known, although there are several theories.

Where do gallstones appear? 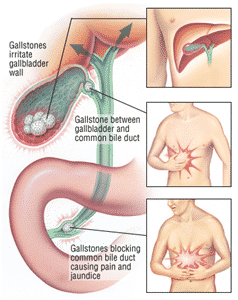 The most common gallstones found in the gallbladder are cholesterol stones. Gallstones can also migrate from the gallbladder to the bile ducts, the largest of the ducts (tubes) in the liver.

Common bile duct stones are much rarer than gallstones. Stones that fall into the common bile duct can cause more serious medical situations than only gallstones left in the gallbladder. Gallstones can often block the bile duct and cause a severe infection called cholangitis. These stones sometimes cause pancreatitis (a condition that causes inflammation of the pancreas.)

The size of gallstones varies. Some people can have large stones, while others can have hundreds of smaller stones. Most gallstones have a diameter of 5-10 mm. Most people with gallstones have no symptoms. When symptoms appear, upper abdominal pain is the most common early sign of gallstones. This pain usually occurs on the right side of the abdomen, often sudden and intense, and can spread to the chest, back, or the area between the shoulders. Other symptoms that may appear includes:

Abdominal pain associated with gallstones is called biliary colic. This type of pain is usually compensated by eating fatty foods and often occurs in the middle of the night. The symptoms experienced may be so severe that one should visit a doctor immediately. 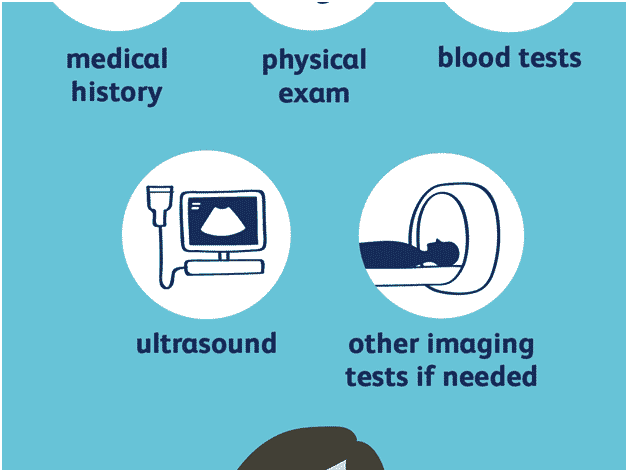 If gallstones are suspected, it is essential to consult a doctor for accurate diagnosis and treatment. The doctor will look for signs of jaundice and examine the stomach for swelling and pain. Blood tests are usually done to check the function of the liver and pancreas and rule out other conditions that can cause symptoms. The most common test to finally diagnose gallstones is ultrasound scanning of the stomach to take pictures of the gallbladder, which are then analyzed to look for signs of gallstones.

Endoscopic ultrasound (EUS) is a procedure that can be used to identify small stones that may be ignored during an abdominal ultrasound. A thin and flexible tube (endoscope) is passed through the mouth and into the digestive tract to ensure an accurate picture of the gallbladder and surrounding tissue.

If gallstones are suspected of blocking the canal, a test called endoscopic retrograde cholangiopancreatography (ERCP) can be performed. In this test, the endoscope with a light and its upper chamber are placed in the digestive tract. A special dye is injected into the bile duct through endoscopy, which allows the outline of the canal to be highlighted. Gallstones found in the channel can sometimes be removed during the ERCP procedure.

If you have stomach pain, contact your doctor, especially if the pain increases over time and is associated with fever, nausea, or vomiting. Abdominal pain has many causes, and your doctor will carefully examine the symptoms to make a correct diagnosis and treatment. If your symptoms are severe, you may be referred to the emergency room for an immediate examination. If you need surgery to remove the gallbladder or gallstones, the prognosis is often positive. In most cases of stone removal, the stones do not return.

But if you don’t have surgery, gallstones can come back. It also applies if you have taken medicine to dissolve gallstones. You don’t need treatment if your gallstones don’t cause symptoms. However, you might need to make lifestyle changes so that gallstones don’t enlarge it and cause problems.

Dr VenuGopal Pareek has extensive experience treating gallstones. We offer general advice and appointments for all your problems with gallstones! Contact at +91 91-777-77715.